Last night I was letting my eye wander around the late sixteenth century Agas Map (as reproduced by the London Topographical Society in their handsome A to Z of Elizabethan London). I’m pretty familiar with the Agas, but I came across a mysterious feature I’d not noticed before.

See that hill to the right, directly underneath ‘CIVITAS’? It’s identified by Prockter & Taylor of the LTS – and subsequently by the online project MoEML – as Mount Calvary. I’ve never heard of this, or even of a hill being in that location. 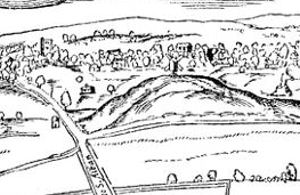 Its location, if you believe the map, is between present day Goswell Road and Central Street, just north of the City. I guess you’d call this area Finsbury. If you look carefully, you can make out a windmill on its summit. 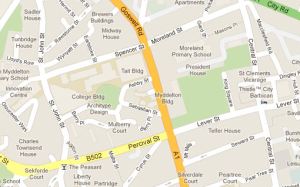 Some internet research on this mysterious hill comes up with the Chapel of Mount Calvary without Aldersgate, identified by John Strype in his 1720 updating of John Stow‘s famous 1598 Survey of London. As follows:

There is (at the farthest North Corner of this Suburb) a Windmil, which was sometime by a Tempest of Wind overthrown, and in a Place thereof a Chapel was builded by Queen Katharine (first Wife to Henry the Eighth) who named it the Mount of Calvary, because it was of Christ’s Passion and was in the End of Henry the Eighth pulled down, and a Windmil newly set up as afore. 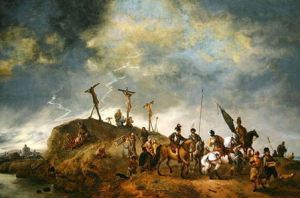 Calvary, of course, is the Latin name for the hill outside Jerusalem on which Christ was crucified (Wikipedia). Its Aramaic name is Golgotha, meaning Place of the Skull. Its site, at least according to tradition, is underneath the Church of the Holy Sepulchre, and is a major pilgrimage destination. Calvary is a common enough name for a church or chapel, especially in the Catholic tradition and especially on hilltop locations, such as the tiny chapel in Pollenca, Majorca.

Climbing to these high Calvary chapels is a form of pilgrimage, tracing Christ’s last journey. On Good Friday, Pollenca becomes a theatre for el Davallament, the Descent from Calvary, when a statue of Christ is carried from the chapel down the Camina del Calvari to the town.

There is evidently no Chapel in our Mount Calvary by the time of the Agas Map, but the name seems to have stuck. Nearby, to the east, lies Finsbury proper, and Bunhill Fields, with its famous nonconformist cemetery (where Blake, Defoe and Bunyan lie). Blake, no doubt, would have loved the London-as-New Jerusalem vibes of Mount Calvary. Bunhill is a corruption of an earlier name, Bone Hill, which appears to have been acquired after the deposition of bones on the fields in 1549 – to make room in St Paul’s charnel house. But it’s also worth noting that Finsbury Circus, to the south-east of our hill, is the site of a Roman burial ground, described by archaeologist Natasha Powers as an ‘odd cemetery’ with its marsh conditions, and its burials in crouched position and decapitated. 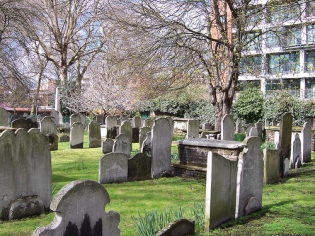 So… Bunhill is Bone Hill, and Mount Calvary – the Place of the Skull. This landscape is getting pretty morbid.

The clearest mention of our site I can find is a City of London deed for the block of land between Goswell Road, Seward Street and Central Street which corresponds with our hill (summary here). The deed appears to trace the City’s ownership back to 1530 and states:

Former names of this property were No Man’s Land, The Mount & Windmill Hill, & it was in the parish of St. Giles without Cripplegate up to 1733, & St. Luke [Old Street], Mx thereafter

Now, at least, I have some more names, some more leads.

At the risk of extending beyond the realms of intelligent speculation, I wonder if there might be a connection between our hill and nearby Clerkenwell (bottom-left of the Agas map thumbnail), where it’s known Mystery Plays were performed at the Skinner’s or Clerk’s Well. Perhaps a perambulatory Passion Play of the kind found in medieval York or present-day Pollenca might have culminated in an ascent of Mount Calvary?

My next steps will be to research those alternative names – ‘No Man’s Land’ and ‘The Mount’ – and of course to visit the site. Are there any traces of the hill left, or has it been entirely obliterated by the modern city? Google Streetview certainly thinks so – the skyline is dominated by the high-rise Thistle Barbican hotel, and the area looks flat at best.

If you have any information that can help identify this enigmatic hill, London’s Golgotha, please leave a comment below or email me directly on info (at) pennedinthemargins.co.uk – I’d be most grateful for any help in tracing this strange London locus.

Firstly – and I can’t believe I didn’t spot this the first time round – there’s a tiny street called Mount Mills within the bounds of our site (map).

The archaeologist Heather Knight (MOLA) has alerted me to her excavations on Seward Street EC1, from which she identifies the site as a 15th century windmill mound made of dumped rubbish. Her results are published in The Transactions of the London and Middlesex Archaeological Society (59, 2008) which I am going to find and read ASAP.

This webpage has lots of interesting information about burial sites in our area. The author, with some help from Peter Ackroyd’s London, identifies plague pits on Seward Street and Mount Mill.

Tom, I can’t add much to your research from the time of the map, but I’d always assumed that in the next century, during the Civil War, it may have been incorporated into the Lines of Communication, the massive earthwork thrown up around London to protect it from possible attack by a Royalist army. The defence work, built by 20,000 Londoners, was strongest on the north side in anticipation that the attack would be from that direction and the biggest works, ramparts and bastions were on the section in Islington, across Goswell Road and St John’s Street. There was a great bastion at Mount Mill alongside Goswell Road, where today, behind the Ivy pub at Seward Street, the road is still called Mount Mill and leads to a slight though visible rising in the ground. After the Royalist danger had passed, the earthwork was torn down by Cromwell afraid that it might be used against the Parliamentarians by City men who were changing sides, as the War began to eat into their fortunes. So that great landmark might have partly disappeared then. I think I read that it was also later a plague pit and a dung hill!

It would certainly explain why what was a significant hill in the fifteenth/sixteenth centuries is no longer visible.

This webpage from English Heritage backs up John’s suggestion:

Fort Number 6 of London’s Civil War defences was located at what is now the land between Goswell Road and Central Street, north of Seward street. According to Lithgow this was the earliest of the defensive works. The common council resolution called for a battery and beastwork, but Lithgow described it as a central, circular redoubt within a lower, outer earthwork of five angles. A description of this fort in 1643 is the only other contemporary account of the defences. Rocque’s map of 1746 shows that three large mounds still remained in 1746, and indicate that the fort had a side 300 metres long. One of the bastions of the fort stood at the junction of Sebastian Street. 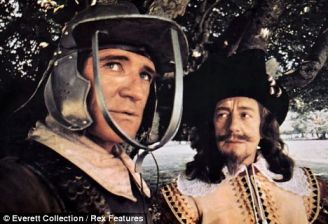 View all posts by Tom Chivers