I’m writing this from my hotel room in Exarchia district of Athens, where very recently a number of anarchist strongholds have been raided by police, as well as cafes and bars. I witnessed one raid myself – in the next street. An enormous number of police on motorbikes stormed a house. There were several loud explosions – tear gas, stun grenades, firecrackers. Crowds of people from the area, some in the regulation all-black of the anarchist movement, rushed to the scene, or looked on anxiously.

This comes towards the end of a day of violent protests in Athens, in which three people (including, allegedly, a pregnant woman) have tragically lost their lives.

I joined the mayhem at around lunchtime, following one of several large demonstrations as it wound its way from Omonoia down the long avenues towards Syntagma Square. I was with the filmmaker Netalie Braun who, as an Israeli, has more experience of political demonstrations than me. 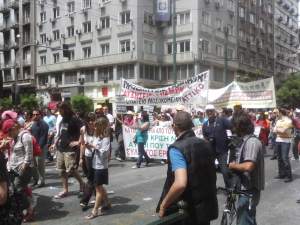 Whilst this march had an upbeat, almost Carnival atmosphere, with protestors drumming and chanting, the signs of violence were everywhere: in the smashed windows of shops, traffic lights torn open; the stone and marble frontages of buildings ripped up and chipped away for missiles. Fires raged in melting dustbins.

The steps of the National Bank of Greece were covered in red paint. The metaphor is clear enough.

Netalie and I took a short cut to meet our friend Yiannis, and found ourselves on a less busy road into the centre. Bizarrely, everyone seemed to be walking the wrong way – back towards us.

At one corner, a group was forming, many holding scarves of handkerchiefs to their faces from the tear gas and pepper spray. A line of geared-up riot police blocked a side road linking the two parallel avenues into Syntagma. A stand-off ensued. The crowd grew in number and noise, chanting and berating the police. 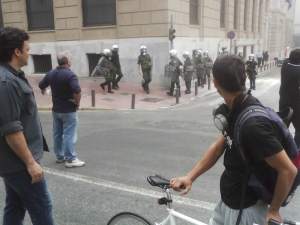 The police in turn threatened with tear gas. The crowd booed as a fleet of cops on motorbikes rushed in. An elderly man walked through the lines, calm as you like, distributing flyers and muttering to himself. Then, at the sound of a whistle, the police charged. Netalie and I ran in the opposite direction. At a safe distance, I called Yiannis. Breathlessly, he told me to leave immediately.

This was just one minor skirmish in a day in which protestors attempted to storm parliament to prevent the politicians voting through the austerity cuts.

Outside the national library, a group of young anarchists were breaking off chunks of marble from a ledge with a hammer or small pickaxe. When one of them saw Netalie filming and me taking photos on my phone, he gave us a very sinister look and shook his head threateningly.

One of the interesting things about the protests here is how contained they often are to certain places, and also how they seem to co-exist with the ordinary activities of the city. One minute, you’re being chased by riot police; the next, you’re strolling down a quiet side road where old men are playing backgammon in cafes, and mothers are pushing their babies in prams.

Sick from tear gas and the acrid smoke, we found a cheap local restaurant and had a lunch of superbly grilled chicken.

Back on the streets, Syntagma Square was now deserted – just a handful of stragglers, photographers, bemused tourists etc. picking through the remains of the main protest.

The wooden benches I’d sat on only two nights previously with Theo and Iliana had been ripped out and burnt. 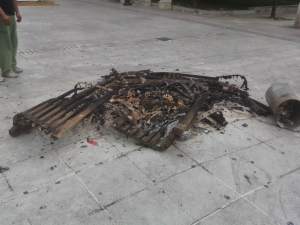 Gas was once again on the wind, and on leaving Syntagma Square my eyes began to weep and then sting terribly, my nose to run, my throat to burn. You can understand why it’s such an effective tool in the police armoury. When you know it’s coming you want to get away immediately…

After finally getting back to the hotel – and some rest – we had dinner off Exarchia Square, which was unusually, eerily quiet.

I wonder what the next few days will bring…