Skip to content
Posted on May 25, 2008 by Tom Chivers Posted in FilmTagged Film, indiana jones, indiana jones and the kingdom of the crystal skull, movies 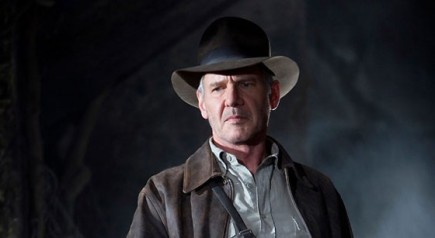 Indiana Jones and the Kingdom of the Crystal Skull hit our shores this week, and last night I trooped to the Barbican with my girlfriend and cousin to see it. I am a massive Indy fan. Palpable excitement outside Screen One. As the film certificate screen appeared, someone started whistling (badly) the famous John Williams theme tune, to universal chuckling from the capacity audience. Kingdom of the Crystal Skull, which is set mainly in South America in the 1950s, was hugely enjoyable – in fact, it was a joy just to see the Indy franchise renewed after so many years. Here are some of my observations, critical and complimentary.

Warning: the following may include spoilers.

1. The dialogue, particularly in the first fifteen minutes, is very hammy indeed. Slow, too.

2. The film is full of in-jokes and references (even a few borrowed lines, such as ‘I’ve heard this bedroom story before’, from The Last Crusade). Whether there are too many is a matter of opinion.

5. Harrison Ford is not as young as he used to be, true. He’s still a convincing action hero, but he delivers many of his lines with none of the spark he used to.

6. This is a wonderfully produced film; visually engaging with some great set-pieces. But it doesn’t feel overly CGI, even at the end. You wouldn’t expect anything less from Spielberg and Lucas.

7. In the first three films, any fantastical or paranormal elements are restricted to the big set-pieces. The main action narrative keeps (just) on the right side of believable. Kingdom of the Crystal Skull veers from this course, a mistake in my opinion. Two examples from the same scene: (1) Indy’s young sidekick, Mutt, swings through the jungle on vines with a troupe of monkeys; (2) Marianne Ravenwood drives an amphibious vehicle off a huge cliff, landing on a giant palm tree which bends slowly to deposit the vehicle into a river. By limited the amount of paranormality, the third three films allowed us to believe for a while, with Indy, that strange occurrences might have a perfectly mundane – and scientific – explanation. 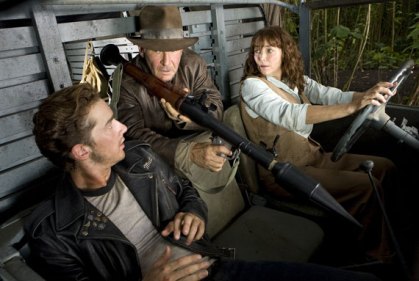 8. The introduction of Indy’s son, Mutt (Shia Laboeuf, above), as his sidekick worked brilliantly. The film hints frequently at the possibility of Laboeuf taking over the action hero role – most explicitly, and wittily, at the end, when he picks up Indy’s trademark hat. Mutt is a greaser, continually combs his hair, and carries a knife (his skill with this weapon mirrors Indy’s whip-play).

9. The reintroduction of Marianne Ravenwood (Karen Allen, also above) is a stroke of genius. She is by far the best female lead of all the previous films – the most beautiful and the most capable in a fist-fight.

10. As my cousin Alex remarked, Kingdom of the Crystal Skull manages to combine Spielberg’s obsession with aliens (ET, War of the Worlds, Taken, Close Encounters of the Third Kind) with George Lucas’s junglephilia. Watch the film, and you’ll see what I mean.